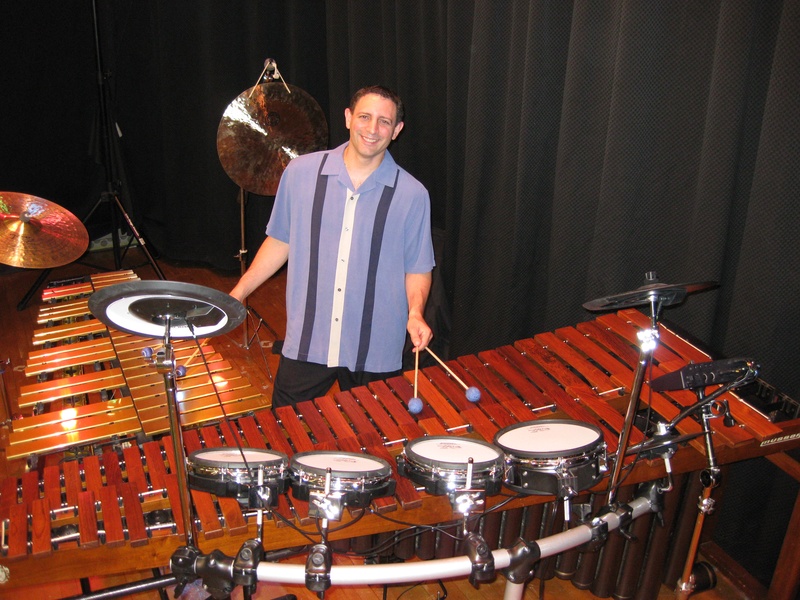 Since 1996 Chris Colaneri has been directing the Columbia Middle School Concert Band and Percussion Ensemble in Berkeley Heights, NJ. His duties at Columbia also include teaching lessons, directing the Jazz Ensemble, Steel Pan Ensemble and General Music class where he runs drum circles. Prior to this position, Chris has directed the band program at John Dewy High School in Brooklyn, NY and has taught at Hubbard Middle School in Plainfield, NJ. He recently co-founded and is currently the Region II representative for the Percussion Educator's Association.

As a vibist, marimba and Latin percussion performer, Chris has led his own jazz quartet CCQ for the past fourteen years. This ensemble has given featured performances at NJPAC, various jazz clubs, private corporate and political functions and jazz festivals throughout NJ. His orchestral endeavors have taken him to Spain, France, Israel and Jordan, where he has given many radio and television appearances. As freelancing percussionist for over twenty years Chris has performed with steel pan groups, African dance ensembles, brass ensembles, local orchestras, wedding bands and community musical theater companies. Currently he is in preparation for his next project as a solo multi percussionist. Chris' recordings span an assortment of genres ranging the styles of jazz, classical, meditation, hip hop, and rock. In an endeavor to promote total percussion to the public schools systems,

Chris has written articles for the music educator’s magazine Tempo and his recent book Incorporating Total Percussion Into The Middle School Band Program has been published through the VDM Publishing House Ltd. Chris has given percussion clinics at many public schools throughout New Jersey and has presented at the New Jersey Music Educator's State Convention. He has also had speaking engagements at Rowan University and Mason Gross School of the Arts on preparing future music educator for developing the school percussion curriculum. Chris also arranges and composes for percussion ensemble and steel pan ensembles. With all his experience as a music educator and performer it was a natural progression for Chris to develop the Pulse School of Percussion. He loves sharing his passion for music with children and adults of all ages and hopes you join in the fun and sign up for a percussion class that suits your needs.

For more about Chris you can visit his personal website at: www.ccmallets.com

Yale Snyder, percussionist, received a Master of Music degree in Percussion Performance from the University of Minnesota School of Music where he studied with renowned percussionists Fernando Meza, Earl Yowell, and Phil Hey.   He holds a B.S. in Music Education from Hofstra University in Long Island, NY.   Yale has studied with some of the finest marimba players in the percussion field and is a strong advocate of new music for the marimba as well as music written for marimba and flute duo with flutist Patricia Lazzara.    Yale has performed at the 2009 NJMEA (New Jersey Music Educators Association) convention and is on the Board of Directors of the Percussion Educators Association of NJ.    In 2006, Yale performed in Italy as a percussion section member of the Rome Festival Orchestra under the direction of Fritz Maraffi and has played with college and professional wind ensembles, symphony orchestras, and percussion ensembles throughout New Jersey, New York, and Minnesota.   Yale has conducted educational master classes for children at various libraries in New Jersey.   He currently teaches 4th-8th grade instrumental music in several private schools throughout the North Jersey area as well as over thirty weekly private percussion students.    He currently resides in Hoboken, NJ. Justin comes from a musical family that includes Lorie Singer, cellist for the motion pictures “Fame” and “Footloose.” Justin started performing professionally at age 19 at local clubs in the metro area, playing many different musical genres.

He has taught percussion in a variety of settings: Music studios such as Lou Rose, Gorny’s, Freehold Studio, and Summit Studio; public education settings such as T.P. Hughes Elementary School in Berkeley Heights; and drum circles at the Integral Yoga Institute in Princeton.

Justin has been a member of: